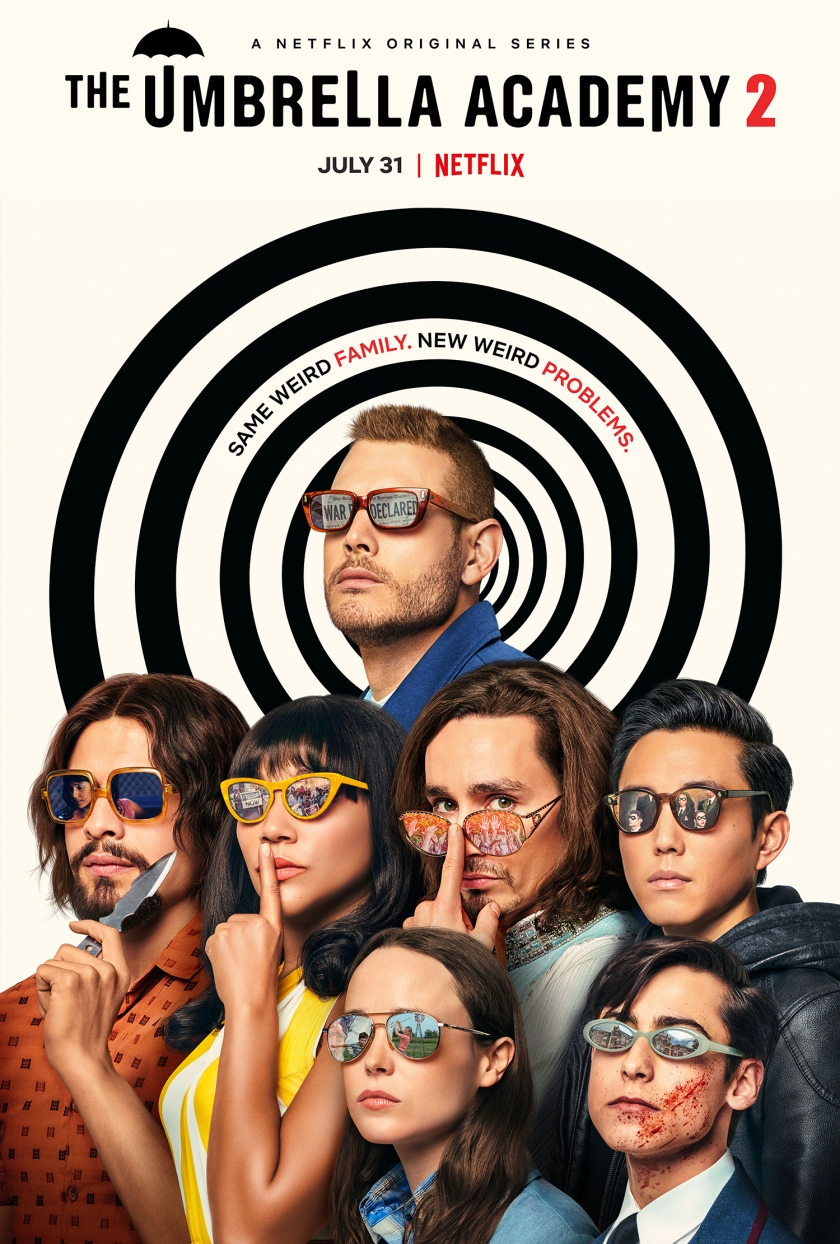 The second season of Umbrella Academy takes the audience on a wild and trippy ride through history as they try to save the world—again. A jump into the 1960s results in the family being separated from one another, and the doomsday clock is reset. We join Five, still in a boy’s body as he tries to find and unite everyone. His first encounter, however, is with a conspiracy theorist who has some important information on where everyone has gone, and a place to call headquarters. Conspiracy theorist Elliot (Kevin Rankin—a.k.a Bryce from Claws) actually enjoys the company, as he becomes the substitute for Mom for the squad while they are in Dallas.

The Details are Important and Correct

Each of the siblings has their own entanglement with a history that may at first appear goofy, but as the stories wear on, they make sense. Diego (David Castenada) discovers where he is and the time period—just before President John F. Kennedy’s assassination. He goes to Lee Harvey Oswald’s house to save Kennedy. He fails, being a brown man is white Dallas. Diego ends up in an asylum, labeled a Cuban terrorist. Klaus (Robert Sheehan) is a cult leader after befriending an older lady and taking over her immense property after she dies. The beautiful property becomes a compound for the debaucherous and very confusing organization. This is where we get our sampling of “free love” and the “peace” generation.

Elsewhere, Vanya (Ellen Page) is an amnesiac caretaker for an autistic boy and his family. She and the boy’s mother are hitting it off very well, so well that a relationship is blooming. The woman’s salesman husband is clueless at first but soon reveals how dangerous the times were for bisexual women back then. When found out, they lost their kids, homes, and oftentimes their freedom as we eventually see in Vanya’s storyline. Luthor (Tom Hopper) is a fighter for hire and “Number One” to a famous gangster. He has given up on his family and must be convinced to take up the cause again.

Another very important storyline is that of Allison (Emmy Raver-Lampman). In the 1960s, Black women are not treated well. In fact, it was dangerous for them to be anywhere alone, except at home. So, Episode 3 of Season 2 is an important one, where they tease out just how a Black woman survived in Dallas in the 60s.

Allison’s storyline is an important one because it shows how nuanced the depiction was. Allison’s situation first appears to us after she has settled into a routine. She is a hairdresser, married to a man who had a steady job by day, but by night, he was leading the fight against segregation. Allison is helping, without the use of her powers. At home, the couple is in love and they show it in an unproblematic way and without stereotyping either person in the couple. The husband isn’t aggressive with a submissive wife. There’s no abuse, drugs, or alcoholism. There are also no children. These are just two Black professionals who are fighting for Black lives.

In Allison’s episode, (2×3), we see that she was saved not by the Black men of the neighborhood, but the Black women holding curling wands and hot combs. Remember how Allison could not speak at the end of last season? Well, she still couldn’t at the beginning of this season and was still taken in by the women. She found sisterhood and community and was so happy amongst these people who were Black like her. She didn’t have to use her power to get ahead, either. In fact, Allison doesn’t use any power until her siblings show up—which creates some funny moments in itself. The episodes included sit-ins and a rally to show how individuals had to come together to change the world. There is also a dance scene with Vanya, Klaus, and Allison that is a light-hearted reprieve from the dark material.

Umbrella Academy actually gets it right. In television, time travel is always used to spice up a story, but the writers and showrunners tend to shy away from any real interactions between their characters and the social issues of the day. DC’s Legends of Tomorrow regularly travel back to these eras with black and brown crew members. In one season, they traveled to the Golden Age of Hollywood, in the midst of the Jim Crow Era. Franz Drameh played Firestorm and Maisie Richardson Sellers as Vixen in this episode where Firestorm chased a crushed on a white actress and Vixen sparred with a pre-rock appropriation, Elvis. Segregation never came up and there was not a “White Only” sign in sight. The show completely erased it.

The late NBC show Timeless did bring some reality to the sci-fi time travel genre. They even shocked the world with the story of Bass Reeves, the real-life inspiration for the Lone Ranger—a Black man. Although the show told some great stories, they had a hard time tempering the negative aspects of our history to find a story that Rufus (the Black character played by Malcolm Barrett) would be anything but scared in. Umbrella Academy’s Black love storyline featuring Allison and her husband, played by Yusef Gatewood, is the perfect blend of nuanced history tempered with humanity.

Umbrella Academy has several curious continuations and collaborations that audiences will enjoy. Mary J Blige does not return in season two, but the Handler, played by Kate Walsh, does. While I miss Mary, having Kate back makes this season just pop with surprises. We get to see a “softer” side of The Handler and a maniacal side that could do more damage than Vanya ever could. Ben is back and his time with Klaus the Cult Leader has not been good. But Ben is stronger. There is also “Dad” the O.G. Hargreeves who is in Dallas too and maybe up to something nefarious. The siblings face all of this while trying to get back to their own timeline.

Oh, and they gotta stop the world from blowing up again, too.

There is plenty of excitement, fun, and horror to keep you bingeing all 10 episodes consecutively.