Creator Spotlight: The Three Nerd Queens Behind #JusticeCon2020 Speak Out

Posted on August 18, 2020 by Jonita Davis Leave a comment

No one really expected JusticeCon to be more than a celebration for the fandom. The event that ran concurrently with San Diego Comic-Con the weekend of July 25 and 26. It came out of nowhere to rock Comic-Con at Home’s virtual, leaving everyone reeling for weeks afterward about the little fan convention that brought so many reveals, celebrities, and so much direct fan interaction. The celebrity guests each engaged directly with fans and a few dropped bombshells that are still making ripples in DCEU. There were even reveals like Justice League director Zack Snyder’s clip of Superman in the notorious black suit. The same suit that fans were told was never a part of the film’s storyline. Ray Fisher, who plays Cyborg is Zack Snyder’s Justice League, opened up about his experiences under the direction of director Joss Whedon. He also promised Whedon would see justices for his wrongs. Both the Black suit reveal and Fisher’s testimony topped the breaking news for the weekend, overtaking SDCC news.

Comic-Con@Home didn’t even generate the buzziest fan event of the weekend. On Saturday, director Zack Snyder appeared on the independent fan convention JusticeCon to debut a short clip from his upcoming “Snyder Cut” of “Justice League” that revealed Superman’s black suit. Notably, the panel — which logged over 260,000 views in less than 48 hours — was live, allowing Snyder to spend nearly an hour interacting with the very fans who brought about the Snyder Cut in the first place. —Adam Vary for Variety 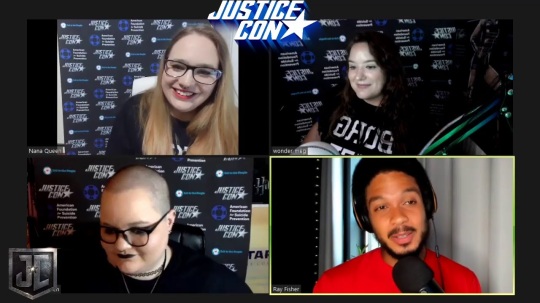 From the top left: Nana, Meg, Cole, and Ray Fisher at JusticeCon for the Ray Fisher panel. Fisher spoke for over an hour with the Nerd Queens and fans.

But, JusticeCon was created to celebrate the ATT and Warner Bros release of Zack Snyder’s Justice League, the cut of the film that was altered completely to get the theatrical version directed by Joss Whedon and released as Justice League in 2017. For three years, fans campaigned for the release of Zack Snyder’s cut of the film. Along the way, they raised over $200,000 for suicide awareness and prevention.

JusticeCon is thus a celebration of the upcoming film, the fandom, and the charitable works. And, the entire thing was put on by three fans, three women, who put their heads and hearts together to create JusticeCon. I spent some time speaking with the women, known on social media as Meg, Nana, and Cole. They indulged my questions about JusticeCon and the aftermath, which has hit Meg particularly hard. It seems that some of the men in the fandom were none too happy about the con or the notoriety. We delved into that and more. 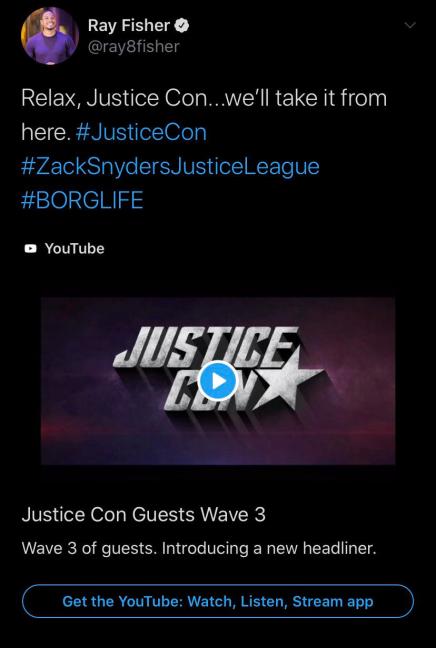 How does it feel to know that you helped a movement gain some momentum?

Cole: Pretty amazing. I was so happy to give Ray (Fisher) a platform to speak his truth.

Meg: Feels amazing to have Zack (Snyder) and Ray speak on stuff that they wouldn’t have been able to at a big con.

So how did this idea (for JusticeCon) come about? And, when?

Nana: We wanted to do something for SDCC [San Diego Comic Con] originally. There was a plan for a screening with an afterparty and charity auction. We were in the process of setting it up. Sponsors, potential surprise guests, everything. And then, SDCC got canceled. So, we decided to make something online instead.

It was supposed to be a really small thing, just with #ReleasetheSnyderCut people first. But then, we revisited the idea weeks later and got Zack on board. The movie got announced, and more and more people with big names agreed to take part. In the end, [JusticeCon] pretty much exploded into what it was.

Are you glad that it became a separate event (from SDCC)?

Nana: I mean, personally I wouldn’t mind doing either. But, JC did allow us to do something different and special for the whole worldwide community. So, I’m happy about that!

What do you think of these haters still squawking over a week later?

Meg: They are babies. 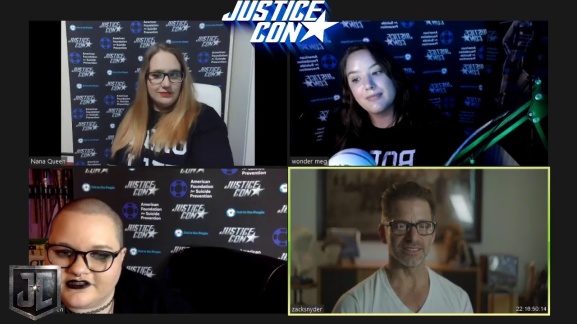 From the top left: Nana, Meg, Cole, and director Zack Snyder. In addition to revealing the black suit Superman clip, Snyder also revealed a new t-shirt designed to raise money for suicide prevention, and he also engaged with fans.

Nana: And haters gonna hate. We had a nearly hour-long feedback panel [at JC]. Our DMs are open. All these people had the opportunity to come and ask. Give constructive criticism. They could also read our Twitter where we explained most of the issues they had. They chose none of that. So really, if you have answers right in front of and refuse to see them for the sake of your crusade, why should I take you seriously? You know what I mean?

Will there be a JusticeCon 2?

What lessons did you learn from this…about yourselves, the fandom, the con, anything?

Nana: I learned that we can put on an event like this, which I never thought was possible. I felt like I needed years of experience working in the field in order to pull this off. But, turns out it was just the wrong mindset.

I learned that this fandom is more united than ever. So many people got behind us, offered help, did extra things to make JC even better. Whether it’s organizing “Crisis on Infinite Streams” or Victor Ku’s charity sketches. People put their differences aside and made this event what it was, together. It was beautiful.

You can catch ALL of the JusticeCon panels on YouTube.