I have made it my business to know about Afro-Futurism and African American speculative fiction. I drowned myself in the depths of this work in my master’s thesis. Let me tell you, this panel spoke to my whole soul, and I am certain that it will speak to yours too.

On Thursday evening SDCC@Home dropped this diamond of a panel at 3pm, featuring John Jennings, Kinitra D Brooks, Sacenna Young Scaggs, and moderated by Aaron Grizzell. These scholars and writers spoke of Afro-Futurism and its relationship to time, identity, and spirituality in such a way that I felt like I was sitting in a college course.

Entering into the Space

The women on the panel, Young-Scaggs, and Brooks spoke a great deal about the concept of entering into the space of Afro-Futurism. Brooks at one point said that “If we get too high in Afro-Futurism, then we think we doin’ something new and we ain’t”. I nearly jumped from my seat and high-fived the screen! The concept of Afro-Futurism as linking the past-present-and future of the diaspora is so powerful. The idea of being the plant, minding the seeds, but respecting the roots comes to mind. A plant cannot forsake its roots and act as if it grew string all on its own. Nothing is new. The plant came from another plant before, and another one before that. The wholeness and beauty of Afro-Futurism represented in this idea is striking. is striking. Young-Scaggs spoke of using Afro-Futurism “to look at all of who we are in our multiple ways” as a life-giving aspect. 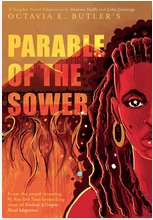 The concept of life-giving and death-dealing was prevalent in the discussion, especially as it relates to modern black culture, gender, identity and where so many our negative aspects of culture came from, and how Afro-futurism allows us as a people to examine these things and decide what of our history should be left behind for the sake of cultural healing. That was a mouth full, I know. The concept of demonizing African culture and religion as anti-blackness and tools of oppression was heavily discussed as well. The discussion of talking about outer-space and inner-space really stood out for me as a special and unique thing to Afro-Futurism was moving and beautiful, and movement as a strategy also struck a particular chord for me. This discussion was more than the average SDCC panel, and we are BLESSED  to have it.

I feel as if I would be doing you a massive disservice by attempting to summarize this panel. I can’t. I could write a 10 page paper on it, but that is not what you come here for, now is it? I will say this, if you came to SDCC with the desire to be soul-fed as a Black person, even if you didn’t, you need to come watch this panel. I insist. It is mandatory in maintain your Blerd card. I said what I said. Sit down and get your whole chakra aligned.

Veteran educator, skilled journalist, and avid consumer of literature. Founding Board of Blerd Galaxy Magazine, Consulting Board of Women in Comics Collective. Bachelor of Arts and Master's program in English from California Baptist University. View all posts by Vanay Smith